May 06, 2022
For the first time, I saw the statue of Ardhanrishwara in Khajuraho temple. It made me curious, and I was searching for more information about the sculpture. At a later time, I got informed that another same sculpture was located in Haridwar in someone’s private collection. Unfortunately, the person refused to admit the same. From several resources, finally, I found the inner meaning of this sculpture. Before proceeding with this discussion, I want to introduce the sculpture. The sculpture was formed with a half male figure and half female. The ward 'Ardh' means Half, and ‘Narishwara’ means God and nature(Prakriti). 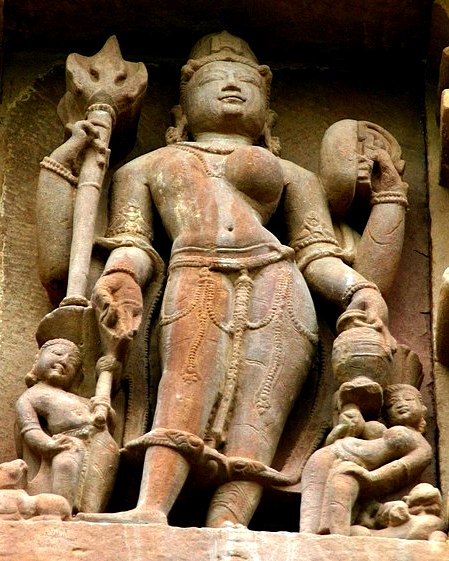 Ardhanarishwara statue from Khajuraho temple (MP, India)
Ancient Hindu mythology affirmed that God is eternal and out of any sexual clarification since it's incorporeal. All the deities constituted within such absolute power we recognized by several forms such as Shiva, Narayana, etc.
Pursuing such a concept, ancient Hindu sages produced an ideal figurative form of God that was nigher a male nor a female. Because in the perspective of Hindu theology, no one is a complete idol in all terms. The Theology says, once upon a time, when God desired to be numerous, the supreme power got divided into numerous particles and produced countless forms in this universe. But the main character was male and female in all forms. Therefore, without the cooperation or the power of both, nothing can be created or made the things possible.
Geeting a deep observation of our surrounded nature, Hindu sages affirmed that inside the infinite creation of God all have a fervency to meet each other once again. In the subconscious mind, we have a thirst because we are incomplete, and it will be forever. They even clarified that only God is absolute. All of us came from it. If we can back to our actual destination anyway, we will be complete. The eagerness of meeting each other is a tiny start to go ahead toward God. 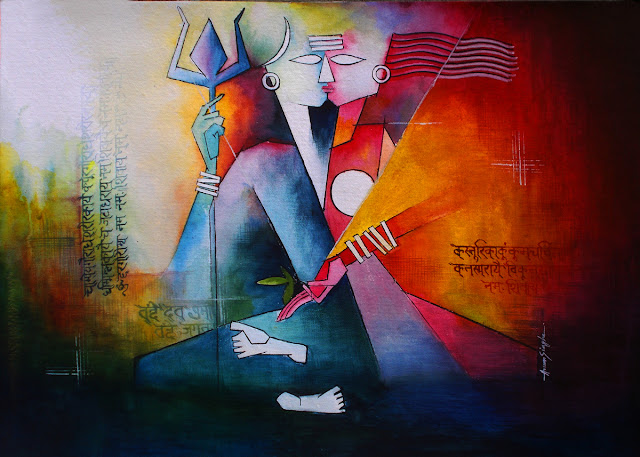 My painting. Titled Ardhanarishwara.
The figurative form of Ardhanarishwara is described the same. Such a figure is neither a male nor a female. Such an insignificant factor (male, female) is not enough to describe that supreme infinite power You can describe it as a mother, as Jesus described as a father, and he was the son of him. All is possible with this figurative form of the Almighty creator.
Here are the details of the painting, -
Title - Ardhanarishwara.
Medium - Watercolor on handmade paper.
Size - H - 22.5 x W - 30.5 inch.
Price - $450 (Rs. - 33000)
To purchase this artwork, visit my shopping page or contact me for additional details.
Now tell me, what do you think about this artwork? Is the artwork described the same as discussed? On both sides, I placed calligraphy of the chants of Lord Shiva and Durga. Because actually, the Hindu ideology demonstrated Lord Shiva and Durga in a single figurative structure.
*Image attribution - Ardhanarishwara photograph of Khajuraho temple [https://commons.wikimedia.org/

My commitment as an artist.

April 19, 2022
We are passing in the worst situation that has not been before. Pandemic perplexed us, and we lost our loved ones. Before getting it away, we are facing a formidable situation of war. It gets lost the things in human life we deserve. Love, mercy, compassion, all the words are now synonyms of the word, delusion. No one in this modern era wants war, rather wants peace, humanity, and solidarity. Beyond all the boundaries, we are the citizens of this world that want to make a beautiful place for humankind. Yes, it’s true. Recently, World Citizen Artist has taken the initiative to start a campaign for peace. As a member of WCA and a part of this campaign, I asked common people around me to participate in this campaign; and I got a positive response. They urged to be a part of it and started sending their campaign images. We have been accumulating images from all the people around the world and making campaigns on the WCA website and social media channels. You can also send a similar campai
2 comments
Read more

April 13, 2022
In March 2022, Art Mania Foundation organized an exhibition on the eve of Women’s Day. They also announced that selected artists will be awarded for their work. I joined the event and submitted my paintings. The criteria were to emphasize the power of females that prominently show their importance in our human life. One of the paintings I submitted was about the perspective of motherly emotion. It was titled Durga the Holy Mother. It won the first prize. It’s the second award I won from India.  Here I want to say a few words about the awarded painting. Deity Durga is considered the reason behind forming this universe. With her enormous power, she holds the creation and nourishes each of the particles of this endless universe. Hindu Purana says if she stops her actions, this universe will be shortened back and end to her absolutely. Deity Durga is also known as Prakriti (nature). All the things happening in nature is a manifestation of her supreme power. Therefore, Hindu philosophy says
Post a Comment
Read more

Amar Singha
Award-winning Indian artist has been working in the modern art world since 2013 and awarded blogger. He is also an author of several books. Brand ambassador of ArtDex (NY), a social networking platform for artists, gallerists, and art collectors.